Moments of the Whirlwind

Changing the political weather requires moments of the whirlwind

In his book Doing Democracy, Bill Moyer, a long-time social movement trainer and theorist of the nonviolent direct action tradition in the United States, describes the concept of a “trigger event.” A trigger is a “highly publicized, shocking incident” that “dramatically reveals a critical social problem to the public in a vivid way.” These events, Moyer argues, are an essential part of the cycle of every social movement. They create vital windows in which activists can rally mass participation and sharply increase public support for a cause.

Prominent examples of trigger events include the accident at the Three Mile Island power plant in 1979, which suddenly made nuclear safety a hot button issue. Just days after the accident, a previously planned anti-nuclear rally in San Francisco that ordinarily might have attracted hundreds of participants instead drew a crowd of 25,000. Similarly, the 1955 arrest of Rosa Parks for refusing to move to the back of a segregated bus prompted a community-wide boycott in Montgomery, Ala. And the self-immolation of Tunisian fruit seller Muhammad Bouazizi set off the revolts of the Arab Spring in 2011.

Trigger events, however, are only the beginning; they provide no guarantee of change. There are countless instances of oil spills and school shootings, for example, that spark outrage but ultimately have little impact on political life. Likewise, there have been many other self-immolations that did not have the effect of Bouazizi’s.

In truth, the triggers that do morph into explosive revolts are often less accidental than they first appear. Civil resistance works when groups are willing to seize an opportunity and escalate — rallying the power of mass participation and personal sacrifice in order to produce ever more ambitious acts of resistance. Before Rosa Parks, there had been previous arrests on Jim Crow buses, but civil rights groups consciously chose to make Parks’ arrest into a test case for segregation, in part because she was a committed activist herself. In other instances, from the Salt March, to Birmingham, to Occupy, movements created their own trigger events, using disruptive actions to make headlines, prompt a reaction from authorities, and begin a cycle in which new participants could join in to ever-larger actions.

The purpose of trigger events and moments of the whirlwind is to shift public opinion and to create active popular support, which means that people are willing to mobilize and/or vote on an issue. Here is a short example of the impact of Occupy Wall Street.

Occupy Wall Street is a great example of a mass protest movement that many people have written of as unsuccessful, but, nevertheless, it played an important role in building public support for economic justice.

A combination of polls over the course of a few months shows that support for the movement’s issues increased significantly during Occupy’s most intensive period of activity. In October 2011, ORC International surveyed 1,050 adult Americans on whether they were becoming more supportive of the movement’s positions. Early in the month, just as the Occupy movement was commencing, only 27% of those polled said they agreed with Occupy’s position. ORC polled again between October 28 and 31, and the results showed 36% in support, reflecting a significant increase in support that month. Finally, in early December, a separate poll conducted by Pew reported 48% in agreement with “the concerns the protests have raised” — an increase of 21 points in just six weeks. 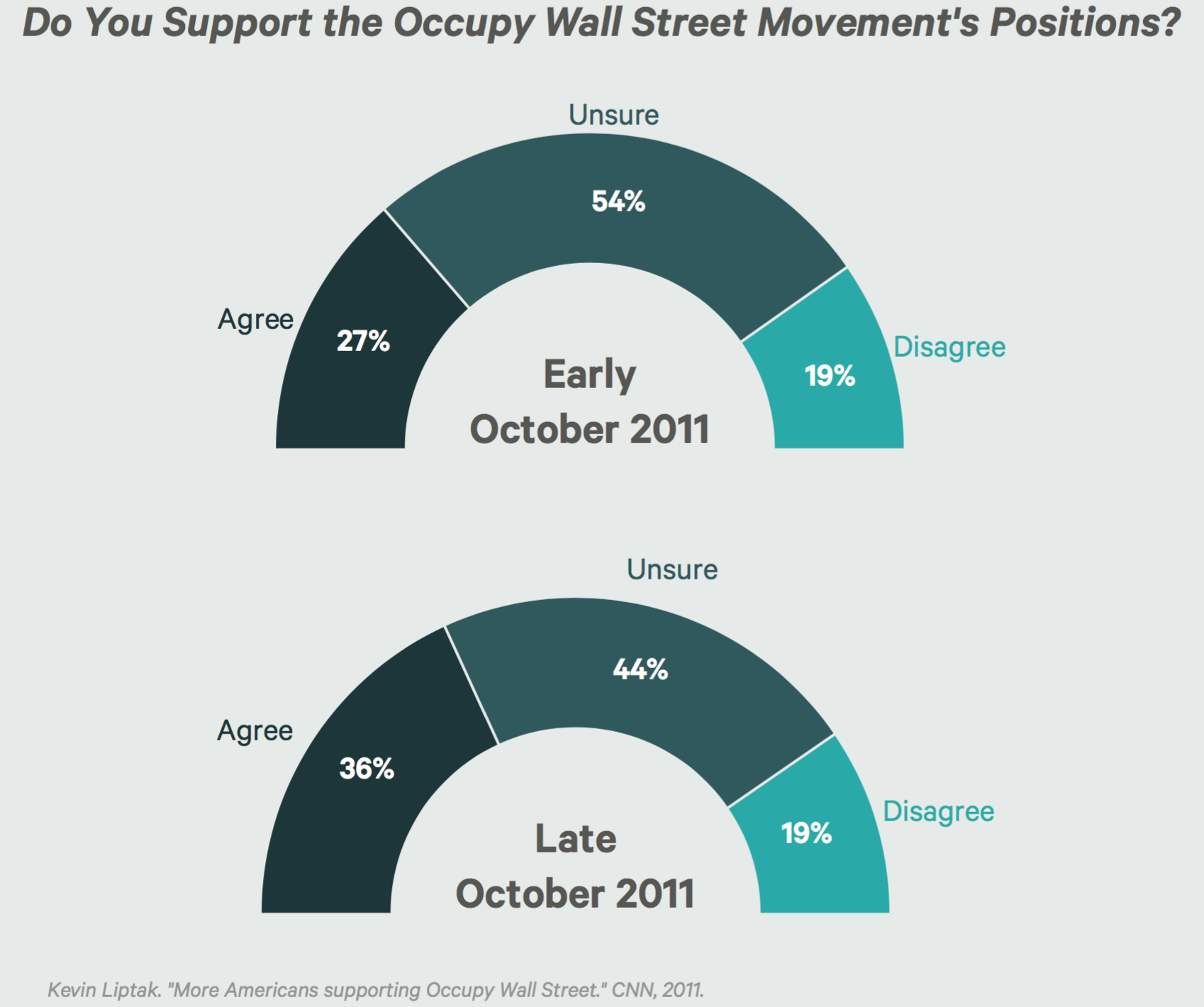 In order to produce moments of the whirlwind we must master the cycle of momentum.

The process of building popular support requires the constant cyclical creation of momentum, which can be achieved through regular and strategic escalation led by decentralized movement teams. New participants are absorbed through actions and are then set up in teams through mass training.

Each step of this cycle is crucial and it is important for movement activists to understand that momentum does not build linearly or exponentially but, rather, cyclically. If activists are prepared for a drop in momentum, and see it as an opportunity for absorption and preparation (which will enhance capacity to build more momentum), then we can avoid discouragement that can destroy our movements.

It’s about taking risk, absorbing the people that get interested in your movement (which increases your capacity to do more), then risking more and then absorbing more. 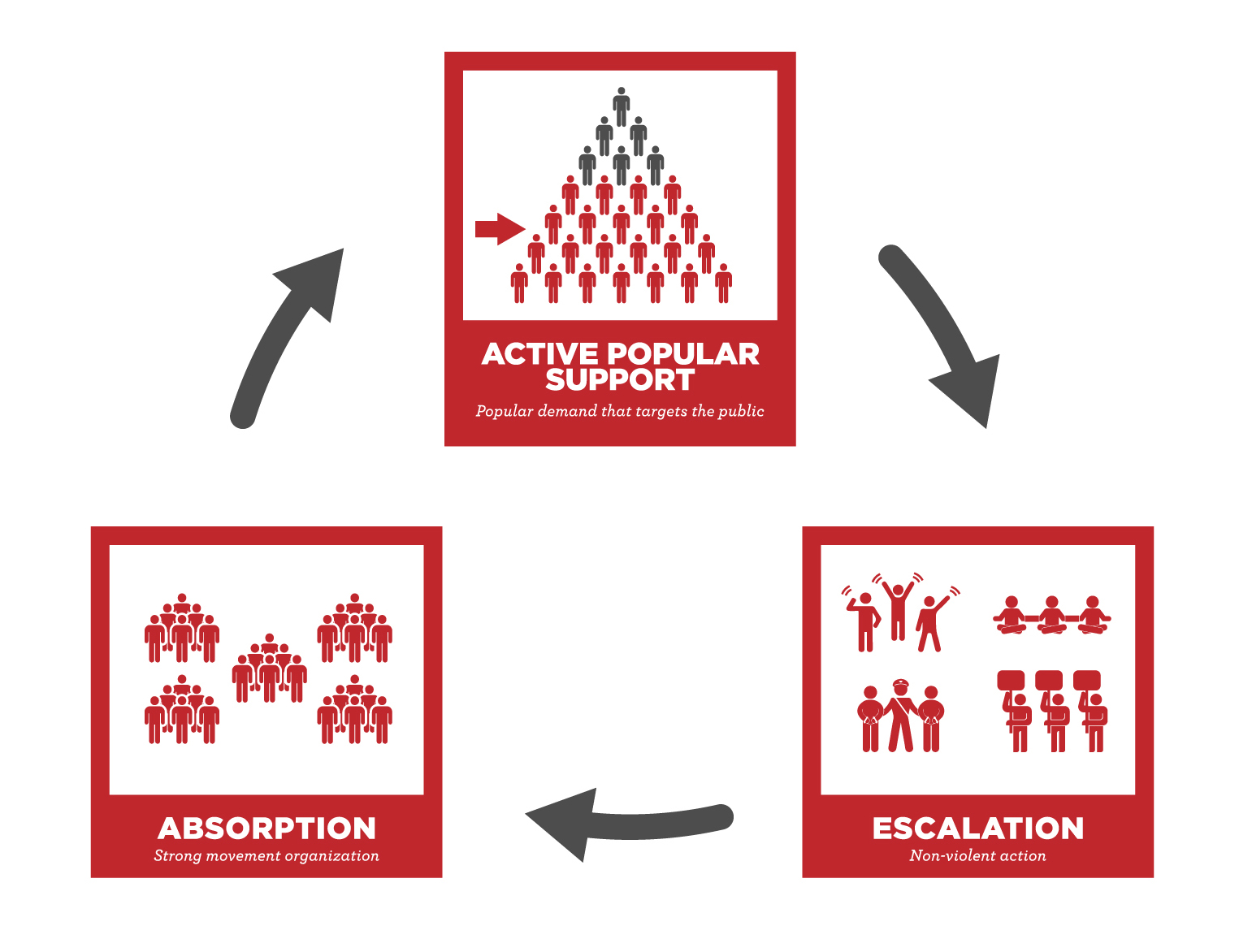 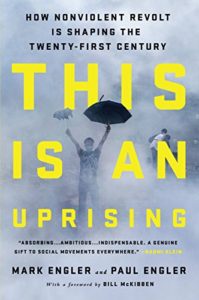 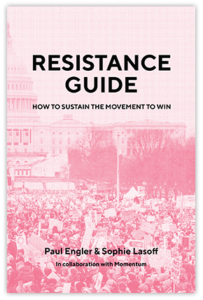 In 2014 the Ayni Institute incubated the Momentum Community, this is the place where organizers and leaders learn the tools of mass protest, check out their training calendar here.